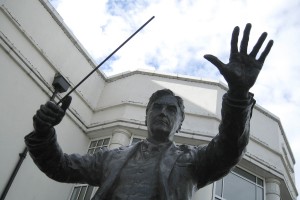 Ralph Vaughan Williams was an English composer, organist and conductor. He was born in Gloucestershire in 1872, but always considered himself to be a Londoner.He started moving his first steps into the music world with an aunt who taught him piano, and by the time he went to prep school he had already some experience also with the violin and the organ.

He studied at the Royal College of Music and also got a MusB, and a BA in history at Cambridge. He also furthered his skills by specialising with Bruch in Berlin, and with Ravel in Paris.

Following the legacy of Elgar, he was one of the leading figures of the 20th century revival of English music. Vaughan Williams’ interest focused very much on English 16th century music and composers. He was also a collector of folk-songs, and believed that restoring English music could only happen by studying and employing native resources, rather than looking at foreign models. His style is a delicate blend of antiquarianism and modernity.

He fought in WWI in spite of being beyond military age. The war had a deep impact on his imagination, and in a way one of the reactions was a spiritual awakening, as one may infer from the religious works he produced after the war.

Today Vaughan Williams is largely remembered for his ‘musical nationalism’, although a greater complexity is attributed to it than in former times.

Vaughan Williams created this setting of Burns’ later version of ‘Ca’ the Yowes’ with its original tune in 1922. This is a particularly atmospheric setting, profiling lyrical solo male voices against very rich harmonies and varying this between the verses of the song.