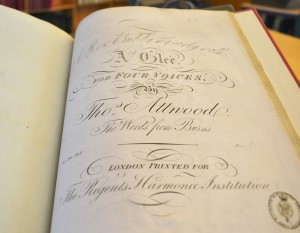 Title page of Thomas Attwood’s setting of
‘A Rose Bud by my early walk’
by permission of G.U. Library, Special Collections

Thomas Attwood was an English organist and composer. He was born in London in 1765 (or at least that’s when he was baptised) and just to make things confusing, he is the son of the musician Thomas Attwood, and the godfather of the musician Thomas Attwood! Throughout his life he had the benefit of royal patronage. When he was nine years old he joined the choir of the Chapel Royal, but presently the Prince of Wales became so impressed with his music skills that he sent him to study music in Naples in 1783. He lived there for two years, then moved to Vienna for two more years. He even took composition lessons from no less than Mozart. He believed in fact in Attwood’s potential, and Attwood played a considerable role in introducing Mozart to a British audience.

After his years abroad Thomas Attwood returned to England, and published some of his works and taught music to royalty. He was then appointed organist of St Paul’s Cathedral, and composer for the Chapel Royal.

In 1793 he married Mary Denton; they had six children.

Attwood’s career was highly accomplished. He was a productive composer and musician, and worked at opera, anthems, glees, sacred music and a variety of other genres. His work was heavily influenced by Mozart’s style.

He died in 1838, and was buried beneath the organ in St Paul’s Cathedral.

A Rose-Bud by my Early Walk

About the piece: Thomas Attwood was very much a man of his time, in choosing to compose a glee for Robert Burns’ song in c. 1819. To start with, he was setting to music the poem of one of the most prominent poets of the period; furthermore, glees were very much in fashion in during the second half of the 18th century. Glees flourished particularly in England; they are a form of unaccompanied part-song. Essentially the same section is repeated a number of times, each with a different colouring, so they each convey different feelings.