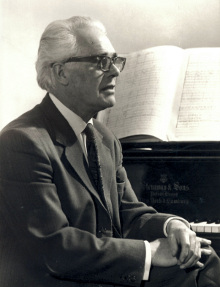 In spite of his birthplace (London) Cedric Thorpe Davie was in fact a Scottish composer. He was born in 1913. He studied music in Glasgow at the Scottish National Academy of Music (today the Royal Conservatoire of Scotland), at the Royal Academy of Music, and the Royal College of Music, where he was a pupil of Ralph Vaughan Williams. He also travelled to various capitals, including Budapest and Helsinki, to further his musical experience with musicians such as Petri, Kodály and Kilpinen. In Finland he met Sibelius, and he constituted a great inspiration for Davie.

He taught music theory and composition at the Scottish Academy, and also served as an organist at Glasgow’s Queen’s Park High Parish Church. He then moved to St Andrews University where he was appointed Master of Music, and there he founded the department of Music at the University.

Davie was also the chairman of the music committee of the Scottish Arts Council, and member of the Arts Council of Great Britain. He received an LLD from Dundee University in 1969.

During his lifetime Davie was not always highly appreciated; this discouraged the composer very much at times. Nonetheless, his career offered him a number of satisfactions and successes, including Lyndsay’s Ane Satyre of the Thrie Estatis, performed at the Edinburgh Festival. His settings of Allan Ramsay’s The Gentle Shepherd, Joseph Mitchell’s The Highland Fair and, of course, Burns’ cantata The Jolly Beggars constitute a window on Davie’s interest for his country and its music.

This is the final chorus with piano accompaniment from Burns’ cantata ‘Love and Liberty’, also known as ‘The Jolly Beggars’. Davie produced the musical score for this cantata in 1952-53.