James MacMillan is probably one of today’s most acclaimed composers and conductors. He read music at the University of Edinburgh, and furthered his studies with a doctorate in composition with John Casken. He settled back in Scotland after a period lecturing at the University of Manchester. Since 1990, with the highly successful premiere of his work Tryst, MacMillan has received many awards and has been appointed to a number of posts of great prestige. From Affiliate Composer of the Scottish Chamber Orchestra to Artistic Director of the Philharmonia Orchestra’s Music of Today series, from Composer/Conductor with the BBC Philharmonic to Principal Guest Conductor of the Netherlands Radio Chamber Philharmonic and the award of a CBE – these words speak for themselves. His recordings are also award-winning. To name but a couple, in 1993 the Koch Schwann disc of The Confession of Isobel Gowdie and Tryst won the Gramophone Contemporary Music Record of the Year Award, and in the same year the BMG recording of Veni, Veni, Emmanuel won the Classic CD Award for Contemporary Music. A MacMillan series on Chandos with the BBC Philharmonic includes The Berserking, Symphony No.3: ‘Silence’ which won a Classical Brit award in 2006, Quickening and The Sacrifice.His production encompasses orchestral works (his percussion concerto Veni, Veni, Emmanuel has received close to 500 performances worldwide), choral compositions, concertos and operas.

In 2003 Robert Bee produced a documentary film portrait of MacMillan; it was screened on ITV’s South Bank Show. 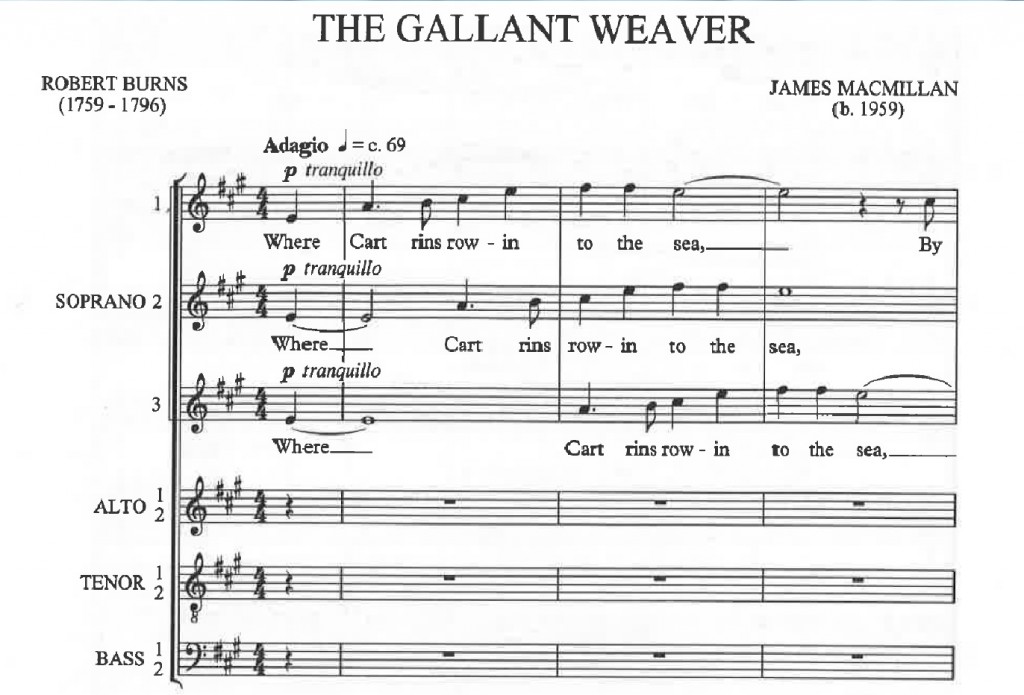 About the piece: In the words of Paul Spicer who reviewed this work for Boosey & Hawkes, ‘So Deep’ is “A superbly imaginative arrangement of Robert Burns’ ‘O my luve’s like a red, red rose’. The melody winds its way through this arrangement supported by a variety of drones (bagpipe-like at times)”. MacMillan remarks about the repetition of the words “so deep” that they create

the ebb and flow of a large, gentle wave.

Here MacMillan chooses to set ‘Major Graham’s Strathspey’, which was Burns’ original choice of tune. This was created in 1992.

About the piece: Again in the words of Paul Spicer, MacMillan’s ‘Gallant Weaver’ is “rich in Scottish flavour, appropriate to its Robert Burns text. Characteristic vocal elements are the ornamental inflections drawn from Scottish folk music and Gaelic Psalmody, and the overall mood is one of tranquility. Distinctive colourings of the voice parts are explored through triple divisions of the sopranos and double divisions in the other parts”. The composition dates from 1997.