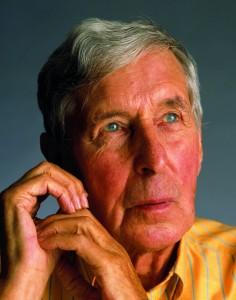 Sir Michael Tippett was an English composer, born in London in 1905. He studied composition and conducting at the Royal College of Music, and also undertook private studies of counterpoint and fugue with R. O. Morris. He conducted and directed a number of orchestras and Festivals, including the Bath Festival in its 1969 edition. He received a CBE in 1959, and was knighted in 1966. Over and above that, he received a CH in 1979 and an OM in 1983.

In 1943 he faced prison after failing to comply with the conditions dictated for conscientious exemption from serving in the military.

Music was very much the centre of Tippett’s life, although fame for him arrived relatively late. The work which made his name known more widely was his 1938-39 Concerto for Double String Orchestra.

The opera King Priam marks a shift from Tippett’s early works (which have been termed his ‘lyrical’ phase) to what is known as a ‘disjunct’ phase, which lasted approximately until 1969 when he entered another phase in which he would combine the previous two aspects of his style with high sophistication. He also looked at various other genres for inspiration: from serious to popular, and from blues to folk.

Tippett’s autobiography, Those Twentieth Century Blues, was published in 1991. He died in London in 1998.

Tippett’s evocative composition dates from 1957, and here he uses the text for a lyrical musical exploration of Burns’ theme of love and wealth.