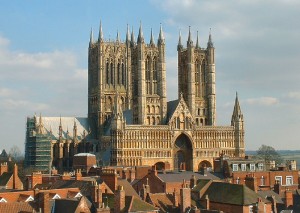 Lincoln Cathedral, where Bennett
served as an organist from 1895

Little is known about this composer and organist. Born in 1863 in Andover, he began his musical studies at Winchester College Choristers’ School. He then went to the Royal Academy of Music in London, travelled to Munich and Berlin, and from 1895 served as a cathedral organist in Lincoln, where he also conducted the Festivals on various occasions.

What emerges by looking at a list of his works is that his compositions comprise two different strands: religious pieces, and music settings of a number of literary works (many of which are choral), including those of Percy Bysshe Shelley, Dante Gabriel Rossetti and, of course, Robert Burns. From this, and from his style, we may infer something more of the composer’s personality, musical education and, perhaps, personal interests. His work, and employment in the cathedral would undoubtedly have led him to a greater understanding of sacred music; at the same time he accompanies this with what appears to be a great deal of literary interest. From his setting of Burns’ ‘I love my Jean’ we can assume he received a firm traditional musical education: the markedly Victorian composition tells us he was much a man of his time.

I Love my Jean

Bennett’s is a setting of Burns’ love song ‘Of a’ the Airts the Wind can Blaw’, with some textual variation. It is clearly rooted in his work as a church musician and composer; it is typical of much British Victorian sacred choral music.