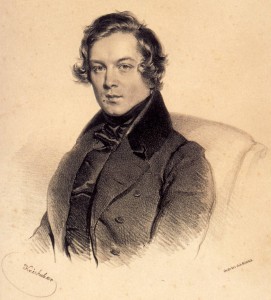 Robert Schumann was a German Romantic composer, and a music critic who made great contributions to music in his day. He was born in Zwickau in 1810, and in parallel with music he developed his passion for literature, as he was brought up in a family with literary interests. His father, for instance, translated the works of Lord Byron and Sir Walter Scott, as well as being a writer himself. He was seven years old when he started taking piano lessons, and immediately began composing – although his first works for keyboard are unfortunately lost. By the age of 13 he was studying cello and flute, and developing his literary interests. It was his father’s will that Robert should undertake three years of University studies, so he enrolled at Leipzig to study law. But he could not take to the subject, and preferred the literary and musical worlds – Jean Paul for literature, and Schubert for music, were his models. He kept a journal, which is a beautiful insight into the composer’s mind. He travelled to Switzerland and Italy, and then settled back in Leipzig to study with Wieck. It is there he met Clara, Wieck’s daughter, whom he did not marry until 1840 due to Wieck’s fierce opposition. He thought Robert was a musician with no future!

In 1833 Schumann fell ill with malarial fever, which together with the death of his brother and his sister-in-law turned into a nervous disorder, which he was to suffer from all his life. He was deeply depressed and suicidal, and at times had visual and auditory hallucinations. In the times when he recovered from these terrible lows, he would compose and be involved in literary activities, such as journal writing.

His musical activity throughout his life was articulated around the focus on different genres and styles: piano music at first, then song, symphonic music, chamber music, oratorio, dramatic music, and finally church music. Each of these genres, or ‘phases’, are characterised by the articulation of distinctive forms, and Schumann’s ideas about them – most often combined with related literary activities.

Schumann spent his last years, from 1854, in an asylum in Endenich, where he was treated for his psychotic disorder. He was better for a time, and thus corresponded with his wife Clara and with Brahms, but he was not allowed to see any family members. Clara did not see him for almost two and a half years, and when she did it was two days before he died. Since his death, she devoted herself to the performance of her husband’s works.

Schumann’s musical legacy lives on to present day, and he is known worldwide as a great exponent of Romantic musical excellence.

In 1846 Robert Schumann set five of Burns’ texts for a work entitled Fünf Lieder (Five Songs), a small set of unaccompanied part-songs for mixed voices.  Although the general inspiration Schumann had for this work was taken from Burns’ lyrical poetry, the second Lied in this group was Wilhelm Christoph Leonhard Gerhard’s rather effective translation of ‘Address to the Toothache’, entitled ‘Zahnweh’ and which he gave the performance indication: