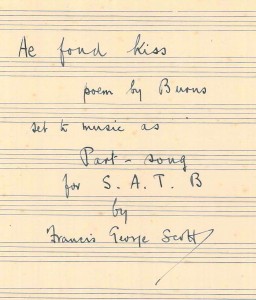 Scott was a Scottish composer, often associated with the Scottish Renaissance. He studied in Edinburgh, and in 1909 took a MusB at Durham. Before becoming a music lecturer at Jordanhill College in Glasgow in 1926 he taught English, which perhaps explains his interesting way of mixing the literary field with the musical world. He was deeply inspired by German Lied, especially those by Wolf and Strauss. He set to music poems and songs by various authors, especially Scottish – from William Dunbar to Robert Burns, and from William Soutar and Hugh MacDiarmid (who at one stage was his pupil). 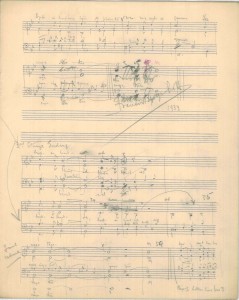 These traits – the combination between literature and music, and his focus on Scottish culture – are in fact typical characteristics in Scott. His works are very ‘Scottish’, in that his inspiration came from Scottish music, poetry, and language rhythm.

When he realised that he shared his birthday (25th January) with Robert Burns he said he “felt as if a star danced above his head”! 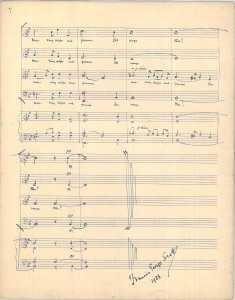 Final bars in fair copy of F. G. Scott’s manuscript of ‘Ae Fond Kiss’.
This is the version we have chosen to record

This recording is a world premiere. Our research identified a number of manuscripts of unpublished settings by Scott; there were three drafts of this particular setting in manuscript holdings at the Scottish Music Centre. The setting we chose to transcribe for performance is dated 1933, and was clearly the most complete of the three. Scott sets Burns’ full text, but with his own musical composition not based on either of the tunes well-known to Burns’ song.

As for ‘Ae fond Kiss’, here Scott sets Burns’ text complete, but not to the original tune. This composition is dated 1932 and, as with ‘Ae Fond Kiss’, it is a world premiere.

Scott said about Burns that he was

the greatest master of the ‘direct utterance’ that ever lived; the greatest lyric poet in all literature